I have never cooked an omelette in my entire life until that Tuesday.

I have no penchant for cooking unlike my friends.  I'm the one doing more of the eating/tasting and I'm not even good at that. One example: I can't tell which is the best tapa.. I just know which ones I like and which ones I don't. They're all good for me.

In an attempt to outdo myself that Tuesday, I decided to cook an omelette. I figured the easiest thing that I could probably cook with eggs on it without being too simple as a fried/boiled egg was an omelette. Thanks to Google I found what looked like an easy recipe.

INGREDIENTS:
1 can of corned-beef
2 medium red potatoes, cubed small
1 cubed tomatoes
salt and pepper
eggs, 2 for each person
1 tsp of milk for each beaten eggs(2)
oil for sauteeing the filling, butter for the omelet
shredded cheddar cheese
Cook the cubed potatoes in oil until tender.
Add the corned-beef. Stir, and let it cook for about 3 minutes.
Season with salt and pepper.
Set aside, while making your omelet.
Whisk your eggs and milk. Season with salt. In a skillet, I used my iron skillet by the way, melt butter over low heat. Pour in egg mixture.
As  the omelet cooks, tilt the pan and draw the edges in toward the center with a fork. Shake pan gently to distribute the uncooked portion.
Add corned beef filling on one half of the omelet, add some of the tomatoes and sprinkle shredded cheese.
Loosen the edges of the omelet with a spatula and tip the pan forward to fold the omelet in half, covering the filled half.
Slide the omelet onto a plate.

Woke up early Tuesday morning and it took me 1.5hrs to finish 3 servings. I never tasted the stuff until the whole thing was done. I was crossing my fingers and toes, hoped not to burn the entire thing.  I'm notorious for burning eggs and even hotdogs. That day must have been my lucky day as the omelette looked perfect to me. 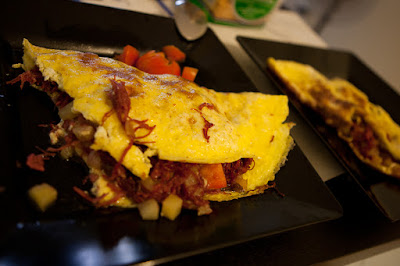 It turned out that it didn't just looked perfect, it tasted good too.  At least that's what the critic said. He may have been a bit too kind though 🙂

Now I think that MAYBE I'm not so bad in cooking after all. But the outcome is only as good as the motivation..kaya pang special events lang ako.☺

Until the next birthday dish!

In Pursuit of Location Independence